Last week I talked about a visit Clare and I made to the mainland to gain some more experience of projects and work being carried out by other Transition initiatives in the south west. We visited orchards, a community recycling project and attended a very interesting renewable energy evening. But perhaps the most interesting and brain taxing was an afternoon we spent in Totnes.

The main goal of Transition initiatives, be they on a city or village scale, is to design and help implement an energy descent action plan for the community. Just as an increase in the use if fossil fuels, from the industrial revolution onwards, has brought about significant changes to our climate and major depletion of fossil fuel reserves, so energy descent is the opposite. 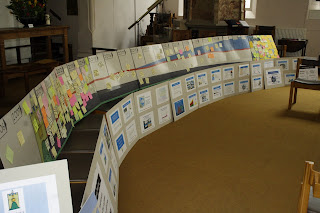 Throughout the country there is largely an acceptance that we must reduce carbon emissions to tackle climate change. But there is a reluctance to give up the way of life we have become accustomed to. Because Transition is a positive process, our response to that is a lower energy future does not have to be a bad thing.

Our high energy society has brought us benefits but many negative effects too. For instance, are we happier for being able to fly around the world? Does electrical entertainment in our homes make us a stronger society? And no-one wins from badly insulated, poorly-deigned homes except energy companies. 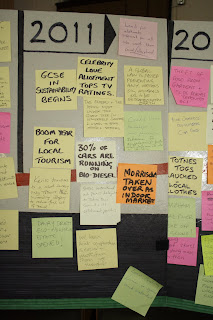 One of the techniques Transition Town Totnes are doing in their Energy Descent Action Plan is to take positive visions and put them at the end of a timeline - in this case 2030 (see photo above). They then ask "if this is the vision we want, what are the steps we need to get there?" This is a process known as backcasting and is a very liberating and positive exercise. People put suggestions and visions next to a year - see photo.

The power of taking a backcasting approach is that it takes away those cultural and social barriers we come across when proposing new or radical ideas. "Oh, it won't work because..." or "good idea, but with all the current Government policies in place it just won't happen". This is a very negative approach.

My response to this would be:
(a) many of the solutions to both global and local problems are local and can be achieved by all of us every day of the year - think food, transport, powering our homes, etc.
(b) there aren't any technological problems, merely social and cultural. We can all elect MPs, we are all a part of society and we can influence Government. Talk to friends, family, neighbours, build that network and help move that groundswell; think if you talk to 100 people you know, then they do the same...it works out to be a very large number! Obama's campaign worked because it had the support and momentum at grassroots level.

No-one would argue this is an easy process, but it is a positive one that holds much promise in the face of a negative situation. Transition Scilly will be working towards an energy descent action plan; in the meantime we've got lots of exciting project and ideas planned - we'll keep you posted here.