Orchards and May Queens

Clare and I have just come back from a Transition Scilly research trip to Cornwall and Devon, looking at a number of different things, from renewable energy and community recycling to Transition processes and orchards.

The latter was particularly relevant as we are on the verge of turning the idea of a community orchard on St Mary's in to reality. So we thought we'd go and see some established orchards on the mainland, see how they were set up, are currently managed and what the niggly issues are.

We visited three very different sites. At Milbrook, SE Cornwall, we met the lovely and incredibly positive Debs, who initiated two small orchards in the village - one by the recreation ground and one at the primary school. Whilst both were small (perhaps just a dozen trees at each), they were not only well managed and quite productive, but they had very little damage or vandalism because young people had been involved in the planting and continued to be involved in the management. Ownership of the project is very important.

At Stoke Gabriel in S Devon, we met the very kind and lovely Ted and Ian, who help to manage the orchard of 50 or so mature trees with others. The orchard contains mostly coder varieties, some identified and some not, all very suited to the damp climate and heavy soil. In that Parish alone there used to be in the order of 2o0 acres of orchards; now less than 5 remain. However there remains a strong desire to keep the orchard culture alive in the village, with extremely well attended apple days and Wassailing annually. 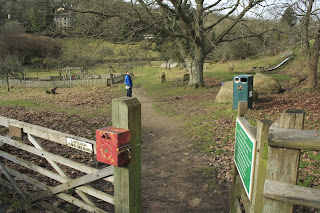 At Lustleigh, on the eastern edge of Dartmoor is a different orchard again. The largest of the lot, probably 3 acres or so and at least 100 trees, this is more open and clearly extremely important to the village. In the photo you can see the children's playpark, other mature trees, open grassy areas, benches, lots of mistletoe and lots of apple trees.

What you can't see is an enormous piece of granite, upon which is a beautiful carved seat, embossed with stainless steel - the seat for the annual May Queen. Clearly this is a site of enormous symbolic importance for the community, and what better way to celebrate than in an orchard?

News on progress on our orchard will be here before long - just sorting out the final details.
Posted by Transition Scilly at 23:52