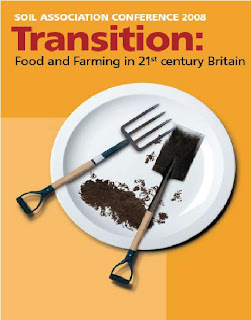 Last week I was lucky enough to attend the Soil Association annual conference in Bristol. The venue was Brunel's Passenger Shed at Temple Meads, an impressive venue with its vaulted rood and couldn't be better placed for transport links. About 400 people came to listen, talk, eat and celebrate. These events always have an incredible energy and this year was no exception.

The food is always good, but some years have been less good than others; this was a vintage year! Phil and Barney Haughton are at the forefront of the organic and local food scene in Bristol and had a major part to play in the quality of this year's catering. Phil Haughton runs The Better Food Company, which is a superb shop, and sorted out all the lunch time and break food. Barney Haughton runs Bordeaux Quay, a great cafe/brasserie/restaurant/shop/cookery school on the waterfront. This played host to an amazing Slow Food dinner - everything was sourced from the South West and ranged from shellfish to soup, perry to pork and vegetables to venison. There were probably 25 different things to eat (over a period of 3 hours!) and the tastes were simply amazing.

Transition: farming in 21st century Britain was the theme of the conference, largely inspired by the Transition movement, focussing on the responses organic farming and growing can make in reply to the threats of climate change and peak oil. Nearly all the talks, and some transcripts, are available on the Soil Association website.

This is a summary of some of the main sessions:
There was so much more besides, all of which can be found on the Soil Association website. Do spend some time to read it - it's very good material.
Posted by Transition Scilly at 18:36