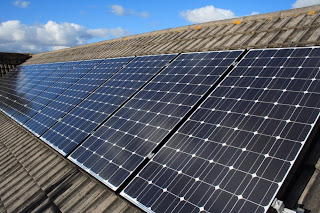 Over the half term holiday Plug in to the Sun have been hard at work installing solar panels on St Martin's primary school. It is a 2.5kW system, and after installation it was knocking out up to 1.8kW, even in the relatively low intensity sunlight of November. The excess electricity will be sold to the National Grid and earn the School money.

This is a tremendously exctitng development that may help to stimulate the installation of more solar panels on public and private buildings in the future. We will need as many as we can get, to combat climate change and provide us on Scilly with energy independence.

Posted by Transition Scilly at 00:09

The Council on Foreign Relations, a think tank, has reported that electricity consumption and production have consistently expanded, resulting in an increased burden on a system not designed for such a large load, meaning that many people are turning to solar panels for security as well as financial and environmental reasons. Zonnepanelen

The actual price you have to pay for electrical power. All things the same, individuals that pay a relatively high per-kilowatt hour (kWh) price for their electricity can have the biggest monetary payback on their solar home energy system. www.zonnepanelen-soloya.nl

Hot water is generated by directing water between the solar panels, heating it up as it goes, after which it is channeled into the water system and of course, comes out of the faucets as hot water. Installateur zonnepanelen Limburg