Rob Hopkins' inspiring talk yesterday marks the end of the awareness raising events of Transition Scilly. Some of these will be repeated at a later date for people who missed any of the film screenings. 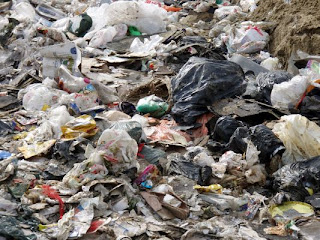 The first of many projects from Transition Scilly will be Plastic Bag Free Scilly. Modbury in South Devon was the first town in Britain to stop using plastic bags and the campaign has been a success. Many more towns have now taken it on and shunned the plastic bag in favour of better alternatives. Indeed the UK Government have been making noises about taxing plastic bags with a view to getting rid of them all together later on.

Plastic bags are the ultimate sign of a throw-away society and cause untold environmental issues. Just consider these facts:
Using alternatives to plastic bags really is very easy, it just requires a slight change in the way we think. Over the course of the next few months we will be working with businesses to build on the good work done by Scilly Waste already and just take it one step further to stop using plastic altogether. We will also be promoting the use of alternatives for consumers and raising awareness of the dangers of plastic bags.

Look out for more information on this blog and on posters put up in the usual places on the Islands.
Posted by Transition Scilly at 10:08