The crucial link between energy and the economy 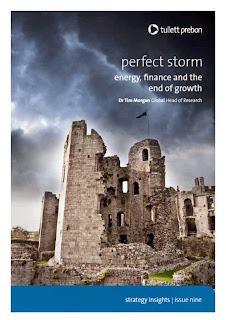 Money is simply a convenient means of exchange, but the system which determines how money is exchanged and valued is economics. Right? Well...partially. A new report 'Perfect Storm - energy, finance and the end of growth' argues very strongly that the rise of any economy has been directly proportional to the energy available to that society.

In fossil fuels we are essentially plundering a resource built up over 100 million years. A litre of oil has the energy equivalent to about 5 weeks human labour. As a society we're not replenishing the resource, so it's like we're children having a party with the inheritance of a dead rich relative. A phrase in the report illustrates this point well:
"The exercise of putting one gallon of fuel into a car, driving it until the fuel runs out and paying someone to push it back to the start-point also illustrates the huge difference between the price of energy and its value in terms of work done...it would cost $6,420 [of human labour]
to get the car back to the start-point. On this rough approximation, then, a gallon of fuel costing $3.50 generates work equivalent to between $5,460
and $7,380 of human labour."

Capitalist economies need to grow to survive, as recent years have starkly illustrated. Given the direct correlation between the economy and energy, it seems we need an infinite supply of energy in order for the economy to grow infinitely. Clearly this is not viable - non-renewable fuels are so called for a reason. New types of energy such as tar sands and gas fracking are being found (and exploited) to back up falling supplies from conventional energy sources like oil wells.

But quite apart from the poor to terrible environmental impacts these sources cause, there is an underlying principle that may render their extraction uneconomic very quickly. It is called EROEI - Energy Returned On Energy Invested. Think of a brand new oil well in Saudi Arabia 50 years ago. All you had to do was drill down, tap the well and the oil would gush out; here EROEI could be 100:1. Compare that to extensive refinement of tar sands - you need to put in huge amounts of energy to extract a small amount of oil; here EROEI could be as low as 3:1.

The report makes this startling conclusion:
"If EROEI falls sharply [to around 10:1] much more of the gross energy is consumed in the extraction process, resulting in a corresponding squeeze
on the energy available to the economy. The essentials may still be affordable, but the leverage in the equation is such that energy available
for discretionary uses diminishes very rapidly indeed. There, through the EROEI squeeze, goes the car, the holiday, the bigger home, the MP3,
the meal out, toys for the children, the afternoon at the golf club or the soccer match. If EROEI falls materially, our consumerist way of life is over."

It makes a strong case that the world economy is the brink of an unfolding collapse, which would change our way of life very significantly, very quickly. The timescale...about 10 years. The Transition to a new way of living would seem a little more urgent then...

You can download the full report here:
http://ftalphaville.ft.com/files/2013/01/Perfect-Storm-LR.pdf
Posted by Transition Scilly at 23:50