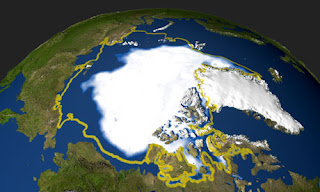 Down the road is a hand dug well that was once a very important source of fresh water for the residents of Middle Town on St Martin's. It goes down about 8 feet and is lined with hefty slabs of granite and steps down in to it. These wells were a common method of reaching groundwater on Scilly before the time of drilling machines and electric pumps. It's a good job we don't rely on it now because it's got less than a foot of (murky) water in it, and hasn't had more than about four feet in all winter.

Yet another dry winter is causing water problems in the short term, particularly for farmers and gardeners who rely heavily on spring rains to get annual crops established. When crops get their roots down they tend to be more resilient to drought than when they're just sown or planted. But perhaps even more worrying are the long term problems building up. There is no doubt that groundwater levels are down here, as with many other parts of the UK, and that this will surely impact on our drinking water supplies at some point in the future.

But is this a three or five year trend that will change to a series of wetter, milder winters, or is the sign of a much longer-term trend? The term 'global warming' was dropped in favour of 'climate change' years ago because it more accurately describes what's going on. Yes, the planet is warming up, but that doesn't mean that everyone will experience a warmer, drier climate necessarily. All sorts of complex feedback mechanisms create different climate effects in different parts of the world. Scientists are getting better at predicting the likely trends, but the full effects are extremely difficult to predict.

Latest advice by the Met Office's chief scientific advisor is pointing to a direct correlation between ice loss in the Arctic and colder, drier winters in the UK. The expectation is that this will become a longer term trend and is worrying reading: http://www.guardian.co.uk/environment/2012/mar/14/met-office-arctic-sea-ice-loss-winter?intcmp=122.

It looks like we'll have to become much more adept at managing with less rainfall in the future and the time to start doing something serious, and planning for the future, is now.

Posted by Transition Scilly at 17:47