Some thoughts on the Gulf oil spill

As BP's incompetence over their handling of the disastrous oil spill in the Gulf of Mexico becomes apparent, thoughts have turned to the implications of oil drilling in difficult places. 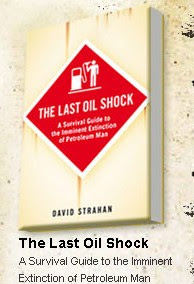 In the UK we used to be self-sufficient in oil and gas thanks to North Sea reserves, but since 1999 we have become net importers of both fossil fuels that underpin our entire society. This is the point known as "Peak Oil " (and "Peak Gas") , when more than half of reserves are gone; the remainder becomes harder to extract, less pure and so more expensive.

Across the world the picture is getting more critical as more and more countries past their Peak - see on this interesting interactive map on The Last Oil Shock. The International Energy Agency's World Energy Outlook states "energy prices [will] follow a rising trend through to 2030" and "oil prices are assumed to rebound with rising demand and supply costs".

As oil exploration delves in to more difficult situations such as deepwater, polar and tar sands, the potential for massive environmental and social disasters increases. How much are people and Governments willing to tolerate such costs?

Interestingly, the Oil Depletion Analysis Centre gathered news that "President Obama appears to be taking advantage of the moment [the Gulf oil spill] to push for a transition away from fossil fuels. In a speech in Pittsburgh on Wednesday he pointed out that the inherent risks will increase the harder oil extraction becomes."

The piece finishes with a very good summation of the urgent need to reduce our reliance on fossil fuels - in particular oil:
"The broader meaning of the crisis is clear. The easy oil is gone, and impending peak oil pushes the industry to ever more extreme limits. The moratorium of deepwater drilling in the Gulf will probably hasten and worsen the oil supply crunch widely forecast for the middle of this decade."
Posted by Transition Scilly at 09:58